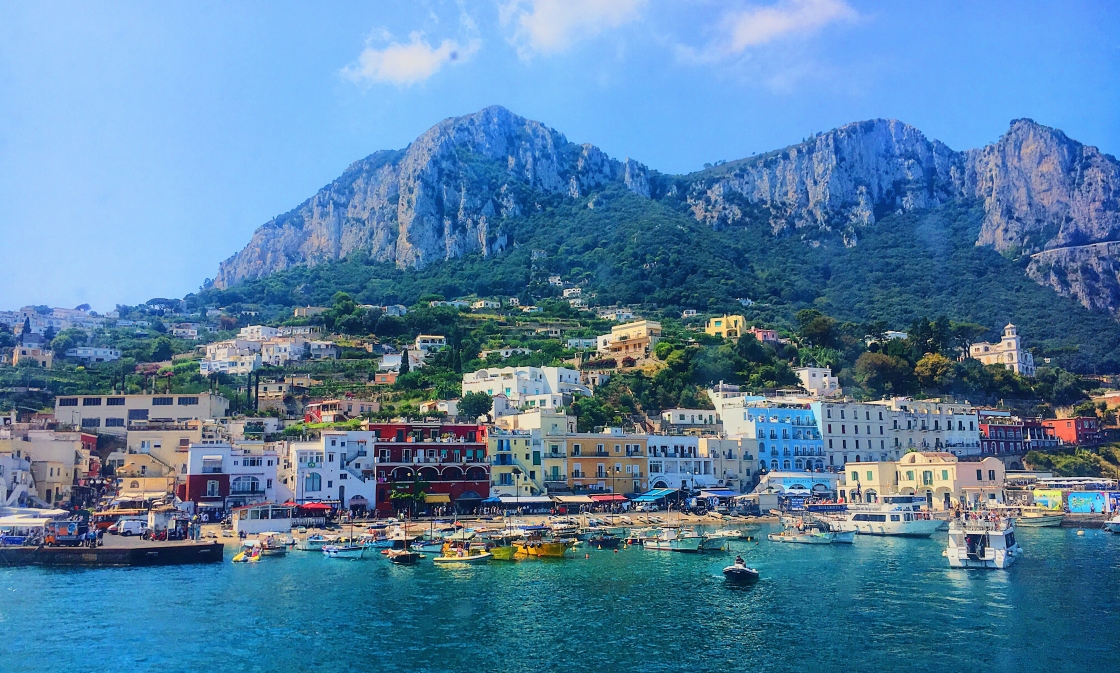 Let’s get fancy, on the Island of Capri…

As soon as you hit the area around Naples and the Amalfi Coast, there are adverts for companies wanting to take you on a variety of different tours of Capri. It is definitely advertised as a ‘must-do’ trip… so of course, I definitely did it. I am a complete sucker for a good advert.

My travel buddy and I had fully booked our time in Naples, so we held off and did it from Sorrento. It was quite expensive for the boat tickets there so I am not sure if we would have been cheaper to do it from Naples… something maybe to investigate before booking. We were able to buy the tickets on the day which really appealed to our lack of organisation.

Capri from the boat gangway… 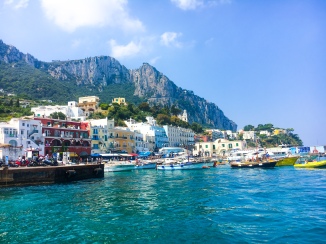 Amazingly, I managed to stay awake for most of the boat journey and even did the research we should have done before leaving Sorrento… I was very proud of myself. I tried to find out what we should do on Capri and every website and blog I found mentioned the Blue Grotto. A lot of the blogs also mentioned how terrible it was waiting to get into the Blue Grotto … this made me a little nervous as I have this stupid travel anxiety about throwing up. I haven’t been sick on a mode of transport since I was a child but every plane, train, boat and bus I get on, I panic that it is going to be the time. I always make sure to have ‘Spewy Bag’ with me, just in case.

As soon as we disembarked from our original ferry, we met different companies, selling a variety of tours. From what we could see, there were 3 different options for tours and we chose the 18euro and 2 hour long trip. It pays to do a little research into the companies before hand, especially if you are a bigger group. We heard some different groups getting good deals on private boat trips. If there had been more than 2 of us, I would definitely have looked further into that too. 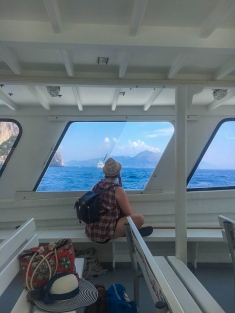 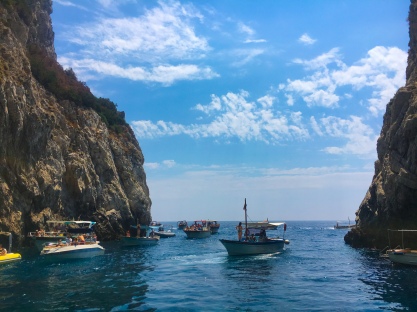 Anyway, our boat trip was AMAZING and we were able to see a lot of the beauty of Capri. We went with a company called LaserCapri and the staff were great. The guy we bought the tickets from said I was a ‘ray of sunshine’ so he had won me over already… Italian charmers. As my friend pointed out, we were the only people who were speaking Italian, saying please and not demanding refunds or changes to our tickets, so it probably wasn’t as big a compliment as I wanted to take it as.

The captain of the boat was great too and gave us lots of fun nuggets of information in a very comical way, as we were travelled around the island. Also, the boat was a great size with lots of inside and outdoor space- suitable for sunworshippers and sunavoiders alike. It was also easy to go between the different areas so you weren’t committed to one location. My favourite part of the inside area was that the windows were huge and sliding so you could still get perfect photos rather than just through glass… it also meant that if I WAS to get sea sick, I had easy access. I didn’t get sea sick though… it was all OK.

On the cruise, I did what I do best and befriended an older Italian man traveling with his American family. He filled me in on some additional fun facts about the area and he translated some of the Neapolitan dialect that was impossible to understand. 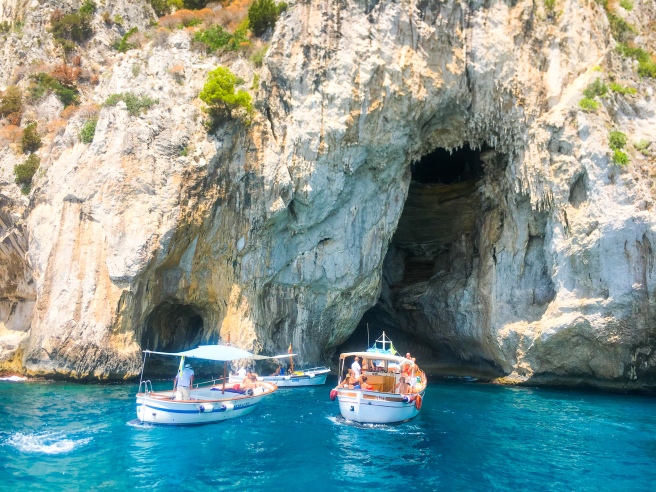 The tour around the island was beautiful and I would advise everyone to do this. I think Capri is definitely best seen from the water. When we got around to the Blue Grotto there were a lot of other boats waiting and our Captains asked how many of us wanted to wait to do the Grotto. Most of the people on board said they did, but a Spanish couple kicked up a big deal about missing their ferry so we ended up going back to the main marina and boarding another boat to take us back to the Blue Grotto. This meant we got the experience of another one of the tours that the company offered and I would definitely recommend paying the extra few euros for the longer tour, as it isn’t far to the Blue Grotto and you won’t see much of the island.

I have to say, I wasn’t super taken by the mainland port town. Please be clear, I did not go around the rest of the mainland and from my Google searches, it looks beautiful. The main port town is not the prettiest or most exciting place to visit. It is basically one street, full of taxis and people in queues for boats. We weren’t hungry so did not eat there but we did check out a menu and we were surprised that it didn’t seem as expensive as we thought it would be, costing around 15euros for a plate of seafood spaghetti. For me, that is fairly standard but I do live in quite an expensive area too.

There is a train/ cable car (in Italian it is called ‘funicolare’)  that takes you to the top of the town and the views from there are apparently incredible. We never actually did this as we did not have time. I am glad that we chose to do the boat tour rather than the town, as one of my other favourite travel buddies did the town and said it only took about half an hour. She also walked up as she is mad. 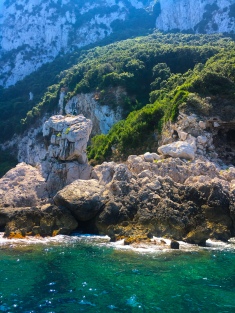 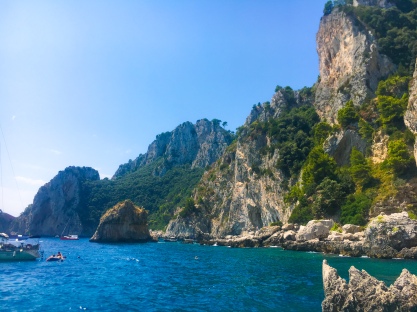 Would I go back to Capri?

Hmm… I don’t know… I would have to investigate the other areas of the island. I definitely would not stay near the port as I don’t think there is a huge amount to do.

Would I advise other people to visit Capri?

Yes, to see it and to do the boat tour. But, I would choose Ischia over Capri and I would choose Elba over Ischia. I wouldn’t say no, if I was being offered a holiday there but it definitely isn’t on my list of ‘I MUST RETURN HERE IMMEDIATELY’.

Mamma’s opinion: ‘Used to be nicer, years ago.’

For The Blue Grotto Experience

Today I started learning how to skateboard…. 😳🛹
After being miserably sick for over a week, the sauna was the perfect place to sweat out all the badness…. And spend some time with the girlies. I think this is one of my favourite parts of Norwegian life… even though I don’t think I’m ever going to be brave enough to just jump into the water.
Excitement levels were 110%! Welcome to the family Siddi. Can’t turn, indicate or go down hills without utter panic but we shall get there (hopefully)!
The new work room dream team @silviaramponi 🥰🥰🥰
When we get together, it doesn’t matter that planning the get together is a wildly stressful time 😂
Morning run up the Caledonian canal and Loch Ness 😍😍😍
Loading Comments...
%d bloggers like this: