Snowboarding… with no broken bones… 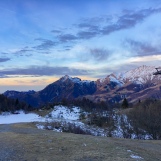 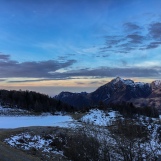 So my January challenge for my New Year’s Resolution was TO GO SNOWBOARDING. This is something I have wanted to do for ages but I kept coming up with excuses to not do it. I am a bit of a wimp and I was super worried about breaking something or dying… my anxieties definitely go to worst case scenario situations. I am not sure death on your first snowboarding lesson is super common. (Although my friend did tell me that he nearly died whilst TEACHING someone’s first snowboarding lesson…)

My friends, who love the outdoors, suggested this ski/ snowboarding escapade and I was apprehensive at first. Then I realized that a lot of my apprehensions revolved around my fear of not having the right clothes and not knowing where to get them. The clothes purchasing was a ridiculous event. I got to Decathlon, which is like a heaven (or hell, depending on your perspective), for all things sporty. I found a clothing brand… and I bought the clothing brand. Like literally, I picked up everything this brand had to offer (which was good because my super organised and comprehensive list lacked gloves and socks…). I had no idea if it was a good brand or not… but it is called Wed’ze and I initially thought it said Wheezy. As an asthmatic, I took it as a sign…

I really like the idea that Abbie and Jess will read that last paragraph and be giggling to themselves about how easy I made the clothes purchasing seem. I will admit … I sent MANY messages, videos, voice notes and photos of different options. Abbie was the only one in the actual know, but Jess was (as always) a great support. I panicked about what clothes I would have to wear under the ski jacket and I didn’t know what size to get. Most of my manic purchases paid off well… although I did buy the trousers 2 sizes too big (because I have serious clothing sizing issues and apparently can’t judge the size of a pair of leggings) and the gloves which are OBSCENELY large.

From this point on my friends were declaring ‘ALL THE GEAR, NO IDEA’, and that was definitely the case. I looked the part though and that was all I was really interested in. I have never been into the idea of skiing (because I am convinced I will impale myself on the sticks) but I always thought snowboarders were cool and super-hot… so now I obviously fitted into that category… right? 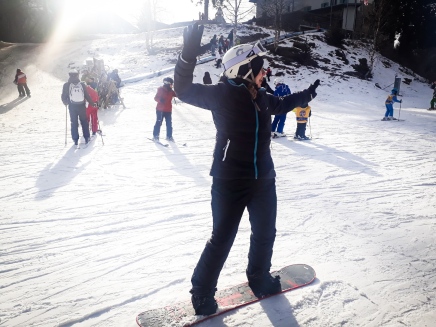 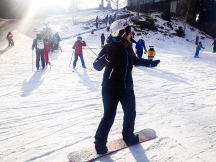 The night before we left, I think I put everyone into panic. I was so scared about being cold that I completely overpacked. I was obsessed with wearing a hoodie under my ski jacket and I just didn’t think it would fit properly (it did) and even though people kept telling me I wouldn’t need it, I wouldn’t listen to them and I took it anyway (I really didn’t need it). I also wore thermal layers top and bottom (standard and obligatory Winter Ninja look adopted) and then I piled on another 5 layers on my top half. I overheated immediately.

The morning of our departure I was up at 4.45 and I had barely slept. I think I was a complete mix of being too excited and being absolutely terrified of what was going to happen. I also was being chauffeured there by Liam who I had only met twice before and both times been super late, so I didn’t want to make it a hat-trick. I was 20 minutes early and spent the time lurking around street corners and bus stops in the pitch black.

The drive to Piani di Bobbio was great. It only took us about an hour from Como and we had a good sing song in the car. The people in the know kept commenting on the lack of snow as we approached the mountains, which I didn’t really consider, but apparently no snow for snowboarding can be a problem… who woulda thunk it? 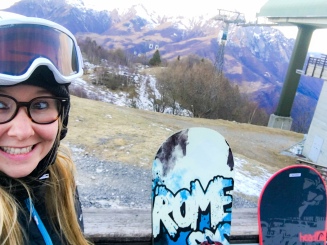 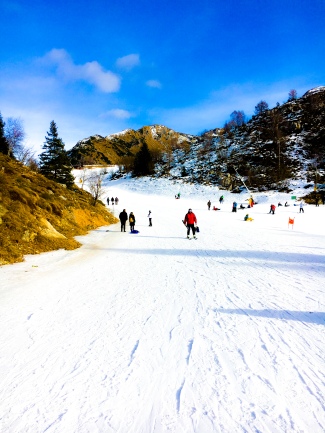 We had expected the drive to take longer than planned so we arrived there super early. It was actually perfect though as we all were eager to have a little breakfast. We popped into the bar and got an incredible ‘brioche’ (this wasn’t an Italian brioche as we normally have, it was a delicious and buttery croissant and it made us all very happy) and a wee cuppa tea. Then we all went for a mandatory pee and the toilets were incredible. Incredible toilets are rare in Italy… there will be a blog post about this…

Soon it was time for us to collect the rest of our gear and for me to start developing some form of an idea. We had booked online so our collection should have been really easy… Should have… it was all still a bit Italian. Liam, our skilled boarder friend, helped Jess and me dress ourselves, as we had no clue how anything worked… In my opinion, snowboarding gear is overly complicated to operate.

We went to buy our ski pass tickets and I went into a slight panic, as I forgot we would have to get a cable car up the mountain. I hate cable cars. They are the worst. Why would anyone enjoy hanging off a metal rope? Matters were made worse by a wind warning which we did not need to be given. I was actually excited by the idea of it being too windy so we would have to walk down the mountain. Jess and I were separated by our friends, as the two of us work each other up in these times of intense drama and anxiety.

The other benefit to the separation was that Liam carried my board for me… I clearly wasn’t pulling off the look as much as I had hoped OR he had worked out that I am super clumsy and was sure I could not have navigated myself onto the gondola without tripping and killing myself or others. My favourite part of the ski pass was the sneaky pocket on your jacket to keep your ski pass safe!! Ingenius. They should have more of these in life. (Sidenote: I lost my bank card on the mountain so maybe I should get these little pockets for general life storage too). 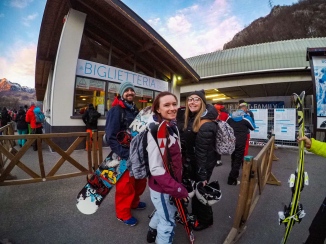 Jess and I were soon to start our first snowboarding lesson. We ended up with an amazing wee teacher. Wee being a very important word. He was so small and so skinny and I so nearly killed him as he tried to haul me up. He was great with us though and giggled along without seeming annoyed at our uselessness.

Jess and I spent the rest of the day together practicing our new found amazing skills. We definitely improved as time went on, but we became more dangerous in our falls. Jess’ face ricocheted off the ground and I landed in a pile of rocks… I have a cracking bruise on my bahookie. We also weren’t strong on our stopping skills, so we adopted some warning cries which just got us strange looks rather than people moving out the way.

Abbie and Liam came back to help us after our picnic lunch (prepared with love by Abbie and Jess). I provided the booze to accompany lunch and a really disgusting punch. Liam gave us some new advice and Abbie developed some mad skills (and probably a very sore back) as she started becoming a ski lift for Jess and me.

Things we saw on the mountain: 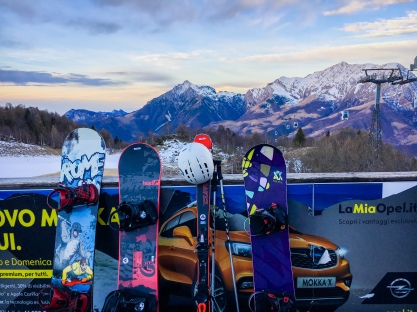 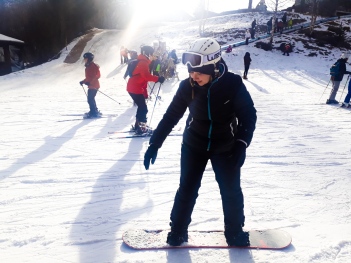 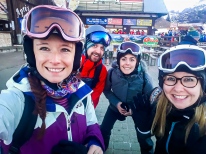 All in all, a wonderful day and an amazing new experience.